New Bold And The Beautiful Spoilers For January 25, 2023 Episode Revealed Skip to content

New Bold And The Beautiful Spoilers For January 25, 2023 Episode Revealed 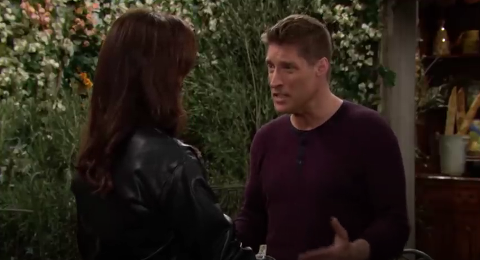 Happy Tuesday, “Bold And The Beautiful” fans. We’re back in action to deliver up another Bold and The Beautiful spoiler session for you guys. In this one, we’ve got the skinny on what’s going down in tomorrow’s new, January 25, 2023 edition.

To start, it sounds like tomorrow’s new, Wednesday, January 25, 2023 edition will serve up some interesting, intense and dramatic scenes as Hope tries to offer up a new proposal. Deacon and Sheila’s conversation from today’s episode continues and more.

We’ll go ahead and start off this spoiler session with the Hope situation. Yeah, it turns out that Hope will have a new idea for her Hope For The Future line in this episode, and we’re going to see her run it by Eric and Steffy at some point. Steffy and Eric’s reaction to this new Hope idea will not be very enthusiastic to say the least.

CBS’ official description for this Eric, Hope and Steffy scenario tells us, “Steffy and Eric balk at Hope’s Hope for the Future proposal.”

You guys can expect to see more of Hope in the January 26, 2023 episode. During it, Hope will get approached by a surprise advocate for Thomas. So, we can see that certainly being a possible interesting moment. Get ready for it later this week.

The second and final spoilery description for tomorrow’s new, January 25, 2023 edition lets us know that Deacon and crazy Sheila Carter will continue the conversation they had in today’s episode. Those of you who saw today’s episode know that Deacon asked Sheila the very pressing question, which was, “How much are you using Bill?” The scene cut out after that.

Again, we’re going to see this same scene continue right where it left off when tomorrow’s new episode starts up. CBS’ description for this latest, Deacon and Sheila conversation tells us, “Deacon presses Sheila for the truth about her motives in regard to Dollar Bill.”

As we previously reported, you guys are going to see more of Sheila in the January 27, 2023 edition. During it, she will have a pretty rough-sounding encounter with Finn at the Il Giardino restaurant. Finn will apparently give Sheila another piece of his mind. So, expect some more intense drama out of that interaction at the end of this week.

Alright, guys. That’s all the teaser scoops we could dig up for tomorrow’s new, January 25, 2023 edition of The Bold And The Beautiful, but certainly expect to see at least a few other scenes play out that were not mentioned in this spoiler session.