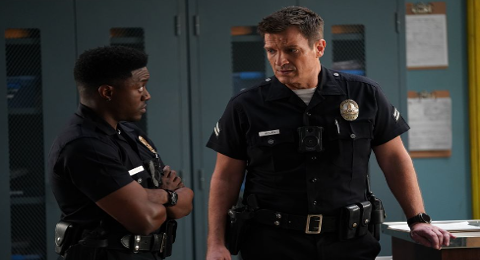 Hey, “The Rookie” fans. We hope you guys were totally satisfied with tonight’s episode 13. Now that episode 13 has officially run its course, it’s time for us to hop back on here and tell you what will be coming up in the next, new episode 14 of The Rookie’s current season 5, which is due out next Tuesday night, January 31, 2023.

We were able to gather up a couple of new, official teaser scoops for this new episode 14 via ABC’s official episode 14 press release synopsis. So, we’re going to definitely crack it open and see what it has to say right now. Let’s go.

For starters, ABC gave us an official title for this new episode 14 of The Rookie’s current season 5. It’s called, “Death Sentence.” It sounds like episode 14 will feature some very scandalous, intense, dramatic, action-filled, suspenseful, interesting and emotional scenes as a mystery gunman gets hunted. A search for a missing mother takes place. A judge gets suspected of crooked activity and more.

We’ll go ahead and start off this spoiler session with the mystery gunman situation. Yep, it turns out that some more dangerous and scandalous activity will be taking place in this episode as a mysterious gunman shoots at someone or a group of people that is going to hit close to home for officer John Nolan and Bailey. So, we’re going to see them totally hop on this case to try and hunt down this gunman.

ABC’s official description for this mystery gunman plotline tells us, “Officer John Nolan and Bailey are on the hunt for a mystery gunman after a shooting hits a little too close to home.”

The second spoiler scoop reveals that Aaron will be in the midst of spending more than he can afford. However, he’s going to set that issue aside to help Lucy try to track down the whereabouts of a mother that has turned up missing. Apparently, this missing mother is the mother of a child that Lucy babysits.

ABC’s description for this missing mother, search mission reads like this, “Aaron struggles to live within his means and joins Lucy to help Tamara when the mother of a child she babysits goes missing.”

The 3rd and last teaser description for this new episode 14 lets us know that Wesley will be looking into something very serious at some point. Apparently, he will start thinking that a certain judge is being paid off because he’s throwing out very important eyewitness testimony in a case.

ABC’s description for this questionable judge storyline reads like this, “Wesley suspects that a judge is taking bribes after he excludes valuable eyewitness testimony from a case.”

Episode 14 was written by Diana Mendez Boucher, and it was directed by Faye Brenner. ABC’s press release confirmed that the next, new episode 14 of The Rookie’s current season 5 is indeed scheduled to show up on your TV screens next Tuesday night, January 31, 2023 at approximately 7 pm central standard time.

Alright, guys. That’s all the info we have for this latest, “The Rookie” TV show, spoiler report, but definitely stay tuned for more.

Be sure to follow us through our The Rookie RSS Feed for more The Rookie news and updates by Clicking Here.