New Bold And The Beautiful Spoilers For January 23, 2023 Episode Revealed Skip to content

New Bold And The Beautiful Spoilers For January 23, 2023 Episode Revealed 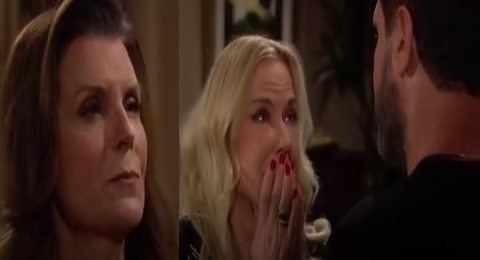 Happy Friday and weekend, “Bold And The Beautiful” fans. We hope you guys enjoyed the way this latest week of Bold and The Beautiful episodes capped off today. Now that another week is in the history books, it’s time to look on to the next week, and we’re here to help you do that with some new spoiler scoops for next week. In this spoiler session, we’ve got details for Monday’s new, January 23, 2023 edition.

First off, it sounds like Monday’s new, January 23, 2023, week-starting edition will feature some more very interesting, intense, dramatic and emotional scenes as Deacon shows up on the scene again. Brooke, Sheila and Bill’s scene from today’s episode continues and more.

We’ll go ahead and start off this spoiler session with the Deacon situation. Yep, it turns out that we will see Deacon show up ,once again, in this episode. This time, he’s going to find himself in a situation where he’ll be forced to hide how he really feels about crazy Sheila Carter.

CBS’ official description for this latest, Deacon plotline tells us, “Deacon is forced to cover his genuine emotion for Sheila.”

You guys can expect to see even more of Deacon in the January 24, 2023 installment. During it, Deacon will get a visit from Sheila at some point. Also, Deacon will be the new proprietor of the Il Giardino restaurant at this time.

This scene will spill over into the January 25, 2023 edition with Deacon trying to question Sheila about her true motives for Bill. So, it sounds like that’s going to be a pretty intense interaction. Get ready for it to play out early next week.

The second and final teaser spoiler for Monday’s new, January 23, 2023 edition lets us know that we’re going to see a continuation of Brooke, Bill and Sheila’s scene that took place in today’s episode. Those of you who saw today’s episode know that Brooke showed up at Bill’s place and tried to plead with him to help her throw Sheila back in prison. The scene cut out with Bill telling Brooke, “You’re right” and giving her some sense of hope that she might be getting through to him.

Again, we’re going to see this same scene pick up right where it left off in Monday’s new episode. CBS’ official description for this latest, Brooke, Bill and Sheila scenario tells us,”Sheila panics as Brooke makes a passionate appeal to Bill.”

Judging from some other future spoilers we’re seeing, it doesn’t seem that Brooke’s efforts to get through to Bill will work as Sheila will still be roaming free all next week. In fact, you guys will see Sheila have another encounter with Finn at the Il Giardino restaurant in the January 27, 2023 episode. During it, Finn will put Sheila in her place! So, that sounds really intense.

Alright, guys. That’s all the teaser spoilers we could track down for Monday’s new, January 23, 2023 episode of The Bold And The Beautiful, but certainly expect to see at least a few other scenes get shown that were not mentioned in this spoiler session.