New Bold And The Beautiful Spoilers For January 24, 2023 Episode Revealed Skip to content

New Bold And The Beautiful Spoilers For January 24, 2023 Episode Revealed 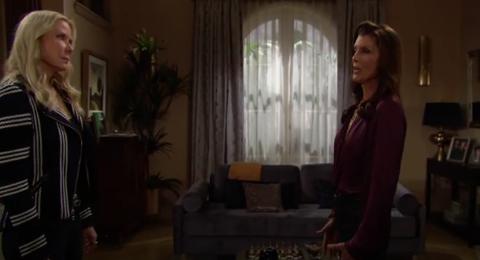 Happy Monday, “Bold And The Beautiful” fans. We hope you guys had another terrific weekend. We are back in your faces, right now, because another new week of Bold And The Beautiful episodes kicked off today, and we have some new spoiler scoops for you. In this session, we’re going to let you know what’s going down in tomorrow’s new, January 24, 2023 installment.

We were able to ,once again, track down a couple of new, official teaser description for the January 24, 2023 edition via the wonderful CBS people by way of their official, January 24, 2023 episode synopsis. So, we’re going to certainly see what it has to say right now. Let’s do it.

First off, it sounds like tomorrow’s new, Tuesday, January 24, 2023 episode will feature some very interesting, possible dramatic and intense scenes as Deacon and crazy Sheila Carter have a new scene together. Hope gets pretty anxious and more.

We’ll go ahead and start off this spoiler session with the Sheila and Deacon situation. Yep, it turns out that we will indeed see another new Deacon and Sheila moment at some point in this episode. Apparently, Sheila will make her way over to the Il Giardino restaurant to see Deacon while in his new role as the proprietor aka owner of Il Giardino restaurant.

As we previously reported, this Sheila and Deacon conversation will spill over into the January 25, 2023 episode and feature Deacon pressing Sheila hard to tell him what she’s really trying to do in regards to her latest Dollar Bill Spencer situation. So, get ready for this Deacon and Sheila conversation to get pretty intense later this week.

The second and last teaser spoiler for tomorrow’s new, January 24, 2023 edition lets us know that Hope will be feeling quite anxious at some point because she’s about to find out whether or not she got good reviews for her latest fashion collection.

You guys can expect to see more of Hope in the January 25, 2023 episode. During it, Hope will try and pitch an idea for her “Hope For The Future” line to Steffy and Eric, and they will not be very receptive of it. So, it sounds like some possible drama could arise with that situation.

Alright, guys. That’s all the teaser scoops we could collect for tomorrow’s new, January 24, 2023 edition of The Bold And The Beautiful, but certainly expect to see at least a few other scenes happen that were not mentioned in this spoiler article.