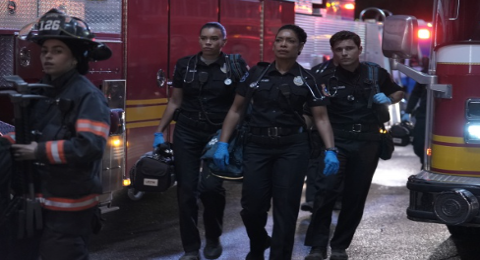 We were able to track down a couple of new, official teaser descriptions for this new episode 1, thanks to the lovely FOX people and their official episode 1 press release. So, let’s go ahead and dive into it right now.

FOX’s official description for this dangerous thunderstorm plotline tells us, “Captains Strand and Vega along with the members of the 126 are called into action to a county fair when a “Derecho,” a series of fast-moving group of severe thunderstorms hit Austin, causing hurricanic and tornadic-force winds, heavy rains, flash floods and a wide path of destruction.”

An alternate description reads like this, “CAPTAIN STRAND AND THE 126 RACE TO THE RESCUE WHEN A WILD WEATHER PHENOMENON HITS AUSTIN.”

The second spoiler scoop reveals that Owen will get some more screentime in this episode. When we see him, he’ll be in the midst of putting his life and health in danger with his new hobby and passion for riding motorcycles.

FOX’s description for this latest, Owen storyline reads like this, “Owen’s newfound passion for motorcycling puts him on a potentially dangerous path.”

The 3rd teaser spoiler lets us know that Tommy might possibly expand her romantic horizons in this episode as she will end up meeting a single father who isn’t hard on the eyes.

FOX’s description for this Tommy scenario reads like this, “Tommy has the potential for a romance when she meets an attractive single father (guest star D.B. Woodside).”

The 4th and last teaser spoiler for this new episode 4 lets us know that there will be a wedding that’s about to go down between T.K. and Carlos. However, a secret that Carlos has been hiding could possiby ruin the whole thing!

Episode 1 will feature a couple of guest stars. They are: D.B. woodside as Trevor; Lyndsy Fonseca as Iris Blake.