New The Last Of Us Season 3 Spoilers For January 29, 2023 Episode 3 Revealed Skip to content 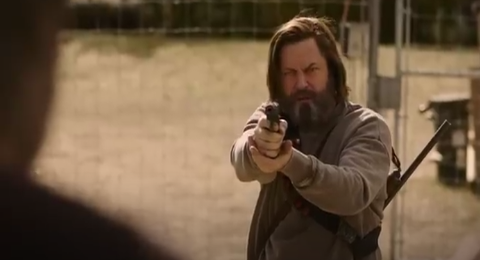 Hey, “The Last Of Us” fans. We hope you guys had a blast watching episode 2 tonight. Now that episode 2 is officially all wrapped up, it’s time for us to jump back on here and go over what the next, new episode 3 of The Last Of Us’ current season 3 will deliver when it shows up next Sunday night, January 29, 2023.

HBO has yet to put out an official press release description for episode 3. However, they did serve up an official episode 3 preview clip. So, that is what we’re going to be using for this spoiler session. Let’s get into it.

First thing’s first. HBO let us know that this new episode 3 of The Last Of Us’ current season 3 does have an official title. It’s called, “Long, Long Time.” It looks like episode 3 will feature some very intense, dramatic, action-filled, suspenseful and interesting scenes as a major shootout and fire breaks out. Bill gets a serious warning and more.

The new episode 3 preview clip starts off with what we believe is a Bill scene from what we could make out. The guy in the scene is seen saying, “Not today. Your new world order jackboots.” Shortly after that, Bill is seen walking out to greet Frank by pointing a gun to his face. Yeah, this is a very intense interaction, but it does turn funny, sort of.

Frank tells Bill, “My Name’s Frank.” Bill says, “Here’s the thing, Frank. If I feed you, then every bum you talk to about it is gonna show up here lookin for a free lunch, and this is not an Arby’s.” Frank says, “Arby’s didn’t have free lunch. It was a restaurant.” Shortly after that, we get a brief scene featuring Ellie walking around a house and picking up a gun.

Next, Joel is seen giving Bill a very serious warning saying, “Sooner or later, there’ll be raiders. They’ll come at night, quiet and armed. Bill says, “We’ll be fine.” After that, it appears that Joel’s warning does come to pass as we’re shown a very violent attack scene that features a serious shootout along with a lot fire getting started.

Frank sees that Bill is in bad condition, and Bill tells Frank to call Joel. Yep, episode 3 is going to give you guys even more action to look forward to. You can view the new episode 3 preview clip for yourselves over on Youtube by Clicking Here.

HBO confirmed that the next, new episode 3 of The Last Of Us’ current season 3 is indeed scheduled to hit the air next Sunday night, January 29, 2023 at approximately 8 pm central standard time.

Alright, guys. That’s all the info we could dig up for this latest, “The Last Of Us” TV show, spoiler report, but definitely stay tuned for more.

Tags: The Last Of Us TV Show News