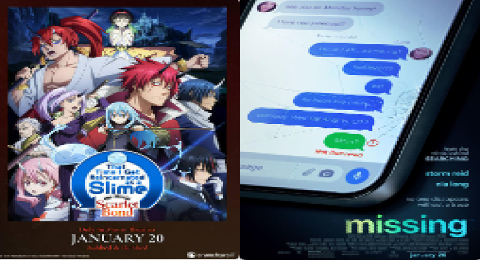 Hey, movie fans. We’re hopping on here to inform you about two new movies that are releasing in theaters nationwide during this weekend of January 20, 21 and 22, 2023. Looking at the AMC movie listings page on Fandango.com, we see that there are 2, new movies that hit theaters this weekend. They are titled,”Missing” and “THAT TIME I GOT REINCARNATED AS A SLIME: SCARLET BOND.”

“Missing” is an American screenlife mystery thriller film written and directed by Nick Johnson and Will Merrick. A brief description of it reads like this, “When her mother disappears while on vacation in Colombia with her new boyfriend, June’s search for answers is hindered by international red tape.

Stuck thousands of miles away in Los Angeles, June creatively uses all the latest technology at her fingertips to try and find her before it’s too late. However, as she digs ever deeper, her digital sleuthing soon raises more questions than answers.”

“THAT TIME I GOT REINCARNATED AS A SLIME: SCARLET BOND” movie is a Japanese animation flick that is rated PG-13 with a runtime of 1 hour and 50 minutes. A brief description of it reads like this, “Corporate worker Mikami is stabbed to death by a random killer and reborn as a slime monster in an alternate world. After that, he gains new abilities and has many adventures with new friends after being given the name Rimuru.”

If any of these two movies sound enticing to any of you, just be sure to check your local theater listings for showtimes and stay tuned for more new movie news.