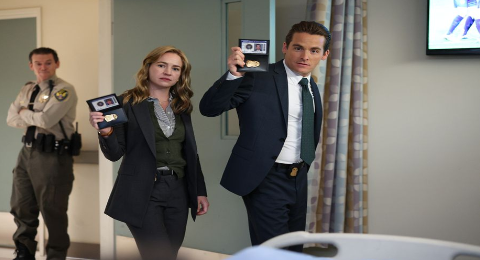 Hey, “The Rookie FEDS” fans. We hope you guys had a blast watching episode 11 tonight. Now that episode 11 has run its course, we are back in your faces to tell you what’s going to be happening in the next, new episode 12 of The Rookie: FEDS’ current premiere season 1 when it arrives next Tuesday night, January 17, 2023.

We were able to track down an official teaser description for one of episode 12’s main storylines via ABC’s official episode 12 press release description. So, we’re going to certainly dig into it right now. Let’s go.

First off, ABC gave us an official title for this new episode 12 of The Rookie’s current season 1. The writers decided to name it, “Out for Blood.” It sounds like episode 12 will feature some very scandalous, intense, dramatic, interesting, possible action-filled and suspenseful scenes.

In the new episode 12, the investigation of a very weird murder will be the main focus of this storyline that ABC chose to reveal. Yep, it turns out that a really strange murder will take place in this episode because the body will be totally drained of all its blood.

In response, we’re going to see the police unit jump all over this case to investigate it. This case will be so weird that it will draw some media attention via a true crime show. Brendon Acres will be on the scene to help solve this case with his “Vampire Cop” expertise.

ABC’s official description for episode 12 reads like this, “As the unit investigates a murder victim whose body has been drained of blood, the gruesome case catches the attention of a true crime show, and Brendon shares his “Vampire Cop” expertise to help solve the case.”

ABC’s press release confirmed that the next, new episode 12 of The Rookie: FEDS’ current, premiere episode 1 is indeed scheduled to hit the air next Tuesday night, January 17, 2023 at approximately 8 pm central standard time.

Alright, guys. That is going to be a wrap for this latest, “The Rookie: FEDS” TV show, spoiler report, but definitely stay tuned for more.